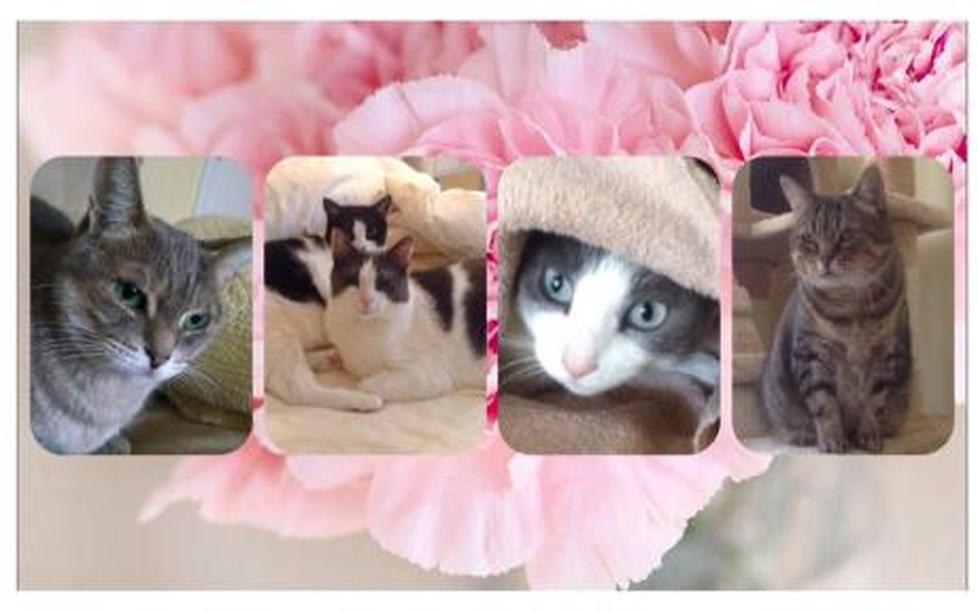 Biographies of the M&M Crew 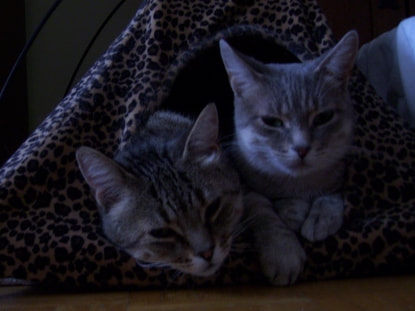 Let me introduce ourselves.  Meet Gentle Mouse, my daughter and me, Whiskers.  We were Grammy’s first foster kitties after she lost her beloved Malcolm, companion of 18+ years and also a rescue.  We were the first of Grammy’s foster failures too.  She adopted us after she realized Mousie would have a major setback if we were adopted separately.  Well, Mouse turned 4 this past August... and a lady doesn’t discuss her age after age 6 and since my birthday is coming up in October you take it from there...  and don’t ask.  Such impertinence!

Mouse will tell our story in a minute but let me just start her off.  Our story begins when I was abandoned as an unspayed adult in Central Ontario.  Of course, I became pregnant and had at least one litter.  GMouse (mostly known as Mousie) is the off-spring of my latest and was about 5 months old when we were rescued.  I fear the others have lived a hard life but GMouse, ever timid, clung to me, her mummy and protector and we were rescued by a team of wonderful people and brought to Toronto.  They thought we were both pregnant but fortunately no, we weren’t.  Mouse had worms and once that was determined and treated she became the svelte kitten that you see in all her photos.  I, on the other hand, looked pregnant but was full of an infection in my uterine horns called pyometra.  I could have died if the vet hadn’t checked me thoroughly and done an urgent spay. Unfortunately, I’ll never be svelte but that’s okay too.... all the more of me to love and cuddle.  I’ll let Mouse tell you about our fostering story and our life now.

Hi everyone.  Gentle Mouse is my name.  Grammy named me Mouse because I was very timid and frightened when we got to her house and for a long time after and then added Gentle because I am sweet and gentle – yes, I am.  Mummy protected me by always coming between me and Grammy until I lost my fear of her.  For the first few weeks I hid under Grammy’s dresser where nobody could touch me only coming out to use the litterbox nearby.  Grammy put food and water under the dresser for me. She would sit on the floor reading a book or talking gently to me, wiggling a feather toy but I was too scared to come out.  Grammy was smart though... she never made eye contact and pretended she couldn’t see me.  That made me brave and eventually I peeked out, then wiggled my way from under the dresser to explore the condo.  Still she pretended she couldn’t see me and would walk past me as though I wasn’t there so I got over my fear of her.

Well, that’s a long time ago. Now I only hide under the sofa when strangers visit, not out of fear but because I’m cautious and need to see if they are dangerous, noisy or kind.  For the quiet visitors that don’t try to make eye contact I’ll be very brave and venture out to play with the toys and beg for chin tickles but mostly I just observe from afar.   I think I may always be cautious of others... but you never know.

I love my Grammy because she never startles me and uses her gentle voice all the time.  Most mornings Grammy wakes to me on her pillow when I give her head butts, and nibble her hair and ears.   After breakfast I go to my aerie for a nap and spend most of the day there.   My favourite toy is my tail... I chase it.  When I catch it I give it a good bite... and am so surprised when it hurts!  That makes Grammy laugh.  Oh, and I forgot to tell you... I love, love, love baked chicken.  Now I’ll tell you about my mummy.

When Grammy opened the carrier that first night at her home mummy leapt out of the carrier and into Grammy’s arms.  Grammy was so startled but tickled pink... well, tickled by mummy’s whiskers... and that’s how she got her name.  Mummy settled in very quickly but always kept an eye on me.  We both would hide in the bedroom whenever we heard noises of people and doggies in the hall.  Now we just say, “pfffft! It’s only that cat-loving dog Jasper down the hall.” but we didn’t know that back then and the noises were scary.

Mummy love’s her creature comforts.  Give her a pillow or sheepskin fleece or a lap and she’s happy... but she’s an old stick (oops don’t tell anyone I called her that) who likes those things in enclosed places... her condo, the tent, a carrier, or snuggled between Grammy and the arm of the sofa.   I guess it makes her feel safe... and that’s good because those boys Etude and Rondo are ruffians. MOL

Mummy is the family groomer. She makes sure we are all spotlessly clean and she spreads our scent to everyone so we all get along – even the ruffians obey her when it’s grooming time.  If they squawk she holds them down with her paw and nips their ears telling them to behave or else, then finishes cleaning them up. (They are high maintenance with their white fur.)  Sweetie and I do our own but she checks behind our ears and does our faces when we miss a spot.  Fussy old girl!   Boy when she tells us to do something we better obey She’s the matriarch and the boss.  Yep, she is!

She’s also the meet-and-greet queen – a real social butterfly.  She meets everybody at the door and welcomes them to our home, then settles on their lap and monopolizes them for the duration.  She never refuses snuggles or pets or any attention from strangers.  Sometimes Grammy wonders if she’s too friendly... and would go with anyone but I don’t think so... she shies away if there’s a strange carrier near the door.

Well, I guess that’s it then. 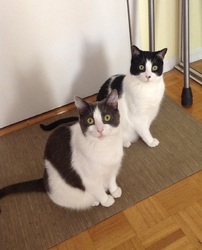 Hello everyone.  We are Etude and Rondo, two of the noisy litter siblings born at Grammy’s house more than three years ago when she was a fostering mummy.  She has had to stop fostering because she kept falling in love and adopting us.  Well, we let her believe that but the real truth is... we all adopted Grammy and boy was she expensive!  We all gave up our cell phones, lattes and catnip and saved our pocket money for two years to pay her ransom.

When we were little duffers (a couple of weeks old) our favourite game was to climb up the duvet onto Grammy’s high mattress and leap out into mid-air.  Grammy said we looked like piebald flying squirrels as we flew from the top of the bed/cliff and did face and tummy-plants onto the pillows that surrounded the bed.  What fun that was... and it sure beats bungee jumping, but that’s a story for another time.

I, Rondo, am the chatty one and the family choir leader.  My day starts before dawn when I begin rousing the wrens, yellow and purple finches and house sparrows and get them to warm up their vocal chords.  Then, at 5:30 AM I whistle for the troops to gather in the bedroom on the window-ledge and sill, tap my baton bringing our cat/bird choir to order, blow my pitch pipe and the caterwauling begins.  What fun we have watching Grammy’s startled response to our angelic voices.  Giggles.  After that the rest of the day is less demanding and not nearly as funny.  Other than supervising Grammy while she prepares meals, chasing the other furries around the condo, snuggling with Grammy at night my most important jobs are to be cute and to get my ‘handsome’ sleep.  Now over to you, Etude...

Hi there everyone.  I have many aliases – Fuzzy britches and Mr Attitude are two of my favourites.  Just so’s you know...I am an easy-going, do-everything-I’m-told kinda fellow! -  NOT LIKELY!  As the biggest and smartest of the team I am determined and have an opinion about anything and everything.  When I wants to ‘play’... I’ll bug and bug and bug Grammy until she pulls out Da Bird or Micro-Mouse or the laser light and entertains us.  It’s so much fun to sit and watch her in action.  Giggles.   Food is my favourite pastime.... and I can be fussy.   Dry food is my all-time fave, that wet stuff is for burying... but when I’m so weak I’m tripping over my toesies I will eat a little of the wet gunk but just to gain enough strength to ‘bury’ the rest.   Oh, and another thing... I’m the cutest of the family... and don’t let anyone tell you differently. 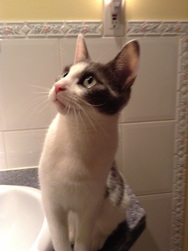 Hi, my name is Sweetie... I am a rescue kitty that my Grammy fostered 'cause she fell in love wif my picture.   I had a broken back leg an’ was only three weeks old when I was taken away from my mummy and dumped in a animal shelter.  The ladies at the shelter said I was too cute and spunky and decided they would save me if they could find a foster... Super-Grammy to the rescue.

I was kept in a prizzen on Grammy’s table for a loooooong time until my leg healed and her nickname for me was Kestrel  'cause I screeched like a hawk when I was unhappy or bored or just wanted attention.  Grammybrought me out and exercise my leg and supervise my playtime, snuggled wif me in her lap and carried me around the house while she ‘worked’.  She said it was hard to do housework with such a cute mischief to take care of.  Whiskers and Mouse avoided me 'cause I was a rambunctious little monkey and the boys was afraid  'cause I made a awful racket and would pounce on them.  I was just playing but they thought I was ferrrrrrrocious and runned away to hide.

Well, long story short... I gots all better, and Grammy ‘dopted me.... couldn’t resist my mischievous personality and spunk.  MOL  My daily routine is to snuggle on Grammy’s lap after my breakfast.  I pertend I’s a baby sucking on her nightshirt while she drinks her morning coffee. Then, I supervise her visits to the shower and when she brushes her toofies, chase the boys around the condo, cuddle up to Whiskers and Mouse, and generally create mischief and mayhem.   My favourite toys are springy thingies and knitted mousies that Grammy makes.  Oh, an’ I pertect everybody from ferocious mousies and dust bunnies.
Mischief and Mayhem Central 2021