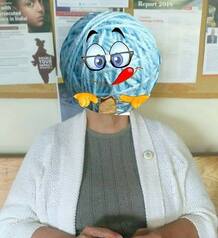 Grammy D
Grammy D is our dear old Grammy at Mischief and Mayhem Central.  She took up knitting again after the turn of the millennium... but had been a knitter and crocheter in her early years.  Other occupations kept her busy during those early years too... calligraphy, stained glass and flower arranging being just a few of them.

This love of using the hands all started when she was a toddler watching her own Grammy (aka. Nana).  Nana was never idle.  She started her morning with a cup of tea, buttered toast and knitting needles and yarn.  She knit socks for the man of the house, and mittens for all the grandkids in between helping with those same children.  Grammy D's own mama knitted for her own babies as they came along but then life got too busy with such a hectic household... 3 generations, then 4 ... there wasn't enough time in the day for such 'idle' preoccupations.

Well, finally Grammy D from now on we'll call her D, now a young adult, took a course in knitting and crocheting, picked it up quickly and began teaching it a year later.  She preferred crochet focusing on handmade blankets, baby outfits until finally career took over and all else was set aside.

It wasn't until illness side-lined D and her idle fingers were itching to be active that she began to crochet again.  Crocheting soon became difficult with the arthritic thumb so she switched to the gentler knitting.  The rest is history.

To start us off we have a slideshow of projects Grammy D knitted as a volunteer for a local hospital.  All donations for the NICU and the Adult Cancer ward.    Only a small sampling of the items is shown here.
Each gown and hat is unique - different stitch patterns were created for the neck and/or skirt of the gowns, the  ribbons colours vary.  AND each hat is made unique by using different coloured yarns and stitch patterns.